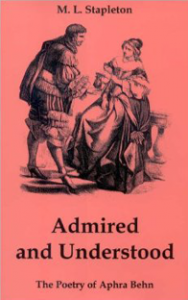 Admired and Understood analyzes Behn’s only pure verse collection, Poems upon Several Occasions (1684), and situates her in her literary milieu. Her book demonstrates her desire for acceptance in her literary culture, to be “admired and understood,” the antithesis of what many surmise from reading her other works—that she saw herself primarily as a guerilla critic of her culture’s views on race, class, and gender. Although the collapse of the market for new plays in the 1680s probably drove Behn to poetry and later to fiction, other factors explain her devotion to her collection. One may have been the status associated with writing poetry as opposed to plays and stories. The title of poet was her culture’s ultimate literary currency. She apparently never wished to be seen as a “woman writer,” and viewed such labels as reductive, unfair, and inaccurate. Published in 1684, playwright Aphra Behn’s Poems Upon Several Occasions is her only collection of pure verse. In this study, Stapleton analyzes these poems and situates Behn in her literary milieu. Topics include the influence of Abraham Cowley on Behn’s poetics, Behn’s understanding of libertinism, and the textual history of “On a Juniper-Tree.”