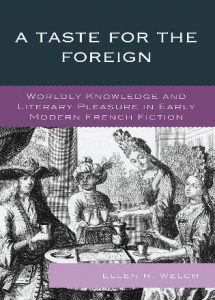 A Taste for the Foreign examines foreignness as a crucial aesthetic category for the development of prose fiction from Jacques Amyot’s 1547 translation of The Ethiopian Story to Antoine Galland’s early eighteenth-century version of The Thousand and One Nights. While fantastic storylines and elements of magic were increasingly shunned by a neo-classicist literary culture that valued verisimilitude above all else, writers and critics surmised that the depiction of exotic lands could offer a superior source for the novelty, variety, and marvelousness that constituted fiction’s appeal. In this sense, early modern fiction presents itself as privileged site for thinking through the literary and cultural stakes of exoticism, or the taste for the foreign. Long before the term exoticism came into common parlance in France, fiction writers thus demonstrated their understanding of the special kinds of aesthetic pleasure produced by evocations of foreignness, developing techniques to simulate those delights through imitations of the exotic. As early modern readers eagerly consumed travel narratives, maps, and international newsletters, novelists discovered ways to blur the distinction between true and imaginary representations of the foreign, tantalizing readers with an illusion of learning about the faraway lands that captured their imaginations.

About the Author
Ellen R. Welch is assistant professor of French and Francophone studies in the Romance Languages Department of the University of North Carolina at Chapel Hill.

Reviews of 'A Taste for the Foreign: Worldly Knowledge and Literary Pleasure in Early Modern French Fiction'

“
This is an impressive book on many different levels. […] Having focused on the importance of pleasure in the reading experience, Welsh successfully applies the same principle to her own act of writing. My delight and pleasure in reading this book is a true tribute not only to Welsh’s stylistic abilities, but also to the sharpness of her nuanced, well-articulated insights. […] Welsh has written a highly rewarding book that constitutes a major contribution to seventeenth-century French studies.
”
- H-France Review
“
Welch offers unique, thought-provoking, and original close readings of seventeenth-century French fiction.
”
- Eighteenth-Century Fiction
Library, Museums and Press
181 South College Avenue, Newark, DE 19717-5267