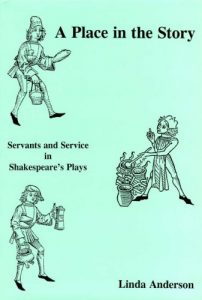 This book explores the virtues Shakespeare made of the cultural necessities of servants and service. Although all of Shakespeare’s plays feature servants as characters, and many of these characters play prominent roles, surprisingly little attention has been paid to them or to the concept of service. A Place in the Story is the first book-length overview of the uses Shakespeare makes of servant-characters and the early modern concept of service. Service was not only a fact of life in Shakespeare’s era, but also a complex ideology. The book discusses service both as an ideal and an insult, examines how servants function in the plays, and explores the language of service. Other topics include loyalty, advice, messengers, conflict, disobedience, and violence. Servants were an intrinsic part of early modern life and Shakespeare found servant-characters and the concept of service useful in many different ways.

About the Author
Linda Anderson teaches at Virginia Polytechnic University.