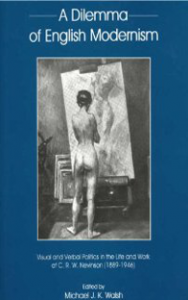 This anthology presents a series of new and important studies on an artist whose work is re-emerging to take its rightful place among the established icons of English modernism in the first half of the twentieth century. It is both timely, and in keeping with current scholarly re-reading of the era in general, through recent publications, conferences, and several key exhibitions. Some of the essays present a “first history” of the artist and his work within the literary and sociocultural context of contemporary London, Paris, Milan, and New York. The remaining essays emphasize a re-evaluative positioning of C. R. W. Nevinson’s work within a modernist framework in literature and art in the first half of the twentieth century in northwest Europe. The title of the anthology draws attention, via this diverse character and his work, to debates surrounding modernism in London prior to, during, and in the aftermath of the Great War, and to the dilemma that artists experienced in these transitory years.

About the Editor
Michael J. K . Walsh is an Assistant Professor of Art History at the Eastern Mediterranean University in North Cyprus.