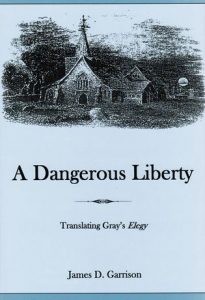 Often said to be “the most popular poem in English,” Thomas Gray’s An Elegy Written in a Country Churchyard circulated on the continent in a wide variety of translations and engaged the attention of such major European writers as Chateaubriand, Lamartine, Baudelaire, Hölderlin, Foscolo, and Zhukovsky. By tracing the history and influence of these translations, A Dangerous Liberty demonstrates the importance of the Elegy in the national literatures of continental Europe. While the sheer number of translations testifies to the poem’s appeal on the continent, their remarkable diversity reveals the poem as the site of conflicting interpretations, evident in the variable liberties taken with Gray’s English. The translations provide, at the same time, a way of reading the Elegy with fresh eyes, of revisiting famous lines and phrases—as well as critical conundrums—with unfamiliar insights and new perspectives.

About the Author
James D. Garrison teaches graduate and undergraduate courses in British literature of the Restoration and eighteenth century at The University of Texas at Austin.