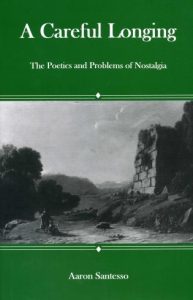 This book examines the emergence of a new genre during the eighteenth century: the nostalgia poem. This genre is best understood by reconceiving the premises of nostalgia itself, examining it as first and foremost a mode of idealization rather than a longing for the past. From the poems that make up this genre, we have derived many of our modern ideas and images of nostalgia. In tracing the history of the nostalgia poem, this book also traces a pattern of “tropic change,” in which a new genre is built around tropes extracted from the dying genres. This new genre then begins producing its own tropes; in the case of the nostalgia poem, these include idealized school days and ruined villages. As these tropes become overly familiar, the nostalgia poem genre itself begins to fall apart. This book reevaluates poems ranging from Dryden’s Hastings elegy to Crabbe’s The Village, showing how works as varied as Gray’s Eton College Ode, Macpherson’s forged epics, and Goldsmith’s The Deserted Village are all part of a doomed literary experiment—an experiment that has nevertheless determined the course of modern nostalgic thought.

About the Author
Aaron Santesso is Assistant Professor of English at the University of Nevada.