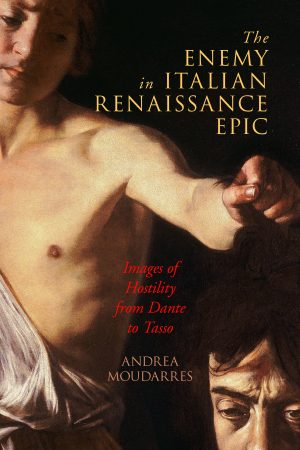 In The Enemy in Italian Renaissance Epic, Andrea Moudarres examines influential works from the literary canon of the Italian Renaissance to reveal that all forms of hostility consistently arise from within political or religious entities. In Dante’s Divina Commedia, Luigi Pulci’s Morgante, Ludovico Ariosto’s Orlando Furioso, and Torquato Tasso’s Gerusalemme Liberata, all forms of enmity are internal, taking the form of tyranny, betrayal, and civil discord. Moudarres reads these works in the context of historical and political patterns, demonstrating that there was little distinction between public and private spheres in Renaissance Italy, and thus there was little differentiation between personal and political enemies.

Reviews of 'The Enemy in Italian Renaissance Epic: Images of Hostility from Dante to Tasso'

“
This manuscript is a significant contribution to a number of fields: Dante studies, medieval and Renaissance Italian literature, comparative epic, the politics of literature, and global studies. Interdisciplinary and intercultural, this study provides a deeper understanding of major works from Dante to Tasso by viewing the theme of violence and/or war as well as the representation of the enemy, uncovering variations and parallels not treated in previous scholarship.
”
- Jo Ann Cavallo, Columbia University
“
Andrea Moudarres’s The Enemy in Italian Renaissance Epic: Images of Hostility from Dante to Tasso is an eloquent and original account of the Renaissance epic tradition in Italy. Using an impressive array of sources across a variety of philosophical and literary traditions, Moudarres allows different voices to come into conversation around the notion of civil strife. The result is not only a brilliant account of the political stakes of how we read Ariosto and Tasso, among others, but also a welcome intervention in the contemporary moment…. Both erudite and highly accessible, this study is an outstanding contribution to Renaissance studies and to wider discussions of the relation of conflict to how we live together.
”
- MLA Scaglione Award selection committee
Library, Museums and Press
181 South College Avenue, Newark, DE 19717-5267