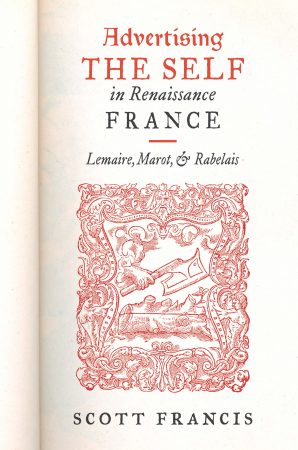 Advertising the Self in Renaissance France is a study of how authors and readers are represented in printed editions of three major literary figures of the French Renaissance: Jean Lemaire de Belges, Clément Marot, and François Rabelais. Print culture is marked by an anxiety of reception that became much more pronounced with increasingly anonymous and unpredictable readerships in the sixteenth century. To allay this anxiety, authors, as well as editors and printers, turned to self-fashioning in order to sell not only their books, but also particular ways of reading. They advertised correct modes of reading as transformative experiences that helped the actual reader attain the image of the ideal reader held up by the text and paratext, experiences provided by selfless authors. Thus, authorial personae were constructed around the self-fashioning offered to readers, creating an interdependent relationship that anticipated modern advertising.

Reviews of 'Advertising the Self in Renaissance France: Lemaire, Marot, and Rabelais'

“
Its primary contribution is to show how authors and editors of the early modern period helped fashion both an ‘authorial persona’ and ‘an ideal reader’ in ways that bring to mind modern advertising techniques. The author uses the publication history of three noteworthy authors from the French Renaissance—Jean Lemaire de Belges, Clément Marot, and François Rabelais—to prove how his hypothesis that Renaissance ‘self-fashioning’ is actually more often the result of very conscious actions on the part of authors and editors to ‘fashion’ readers. In this way, the manuscript offers a new understanding of the overly familiar, but not always appropriate, concept of self-fashioning.
”
- Michael Randall, Brandeis University
Library, Museums and Press
181 South College Avenue, Newark, DE 19717-5267